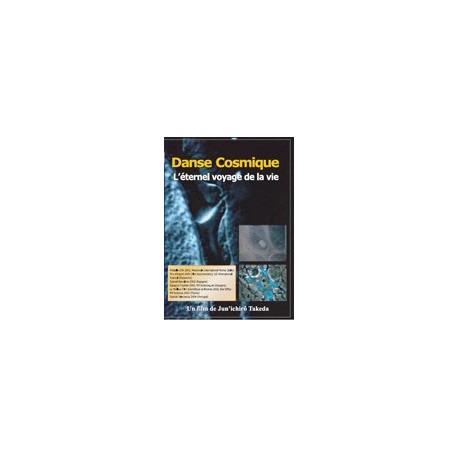 Our body is a microcosm consisting of more than 60 thousand billion cells. Unceasing exchanges of information between cells keep us alive, control the development of our body, and prepare it so that it can engender new lives. High technology microcinematography allows for discovering stunning images of what is going on inside our body: the first cell division of the fecundated ovule, the formation of sense organs, the multiplication of nerve cells, the fight of lymphocytes against cancer cells, etc.

Through the history of a human life, the movie answers some essential questions: Where do I come from? What will remain after me? Human life takes on resonance and harmony with the large macrocosm through these true images of our body cells

The blue, shining space that surrounds the Earth is called the biosphere. Only within

this area can life exist.

The human body is made up of as many as 60 trillion cells.

On the cell membrane, there exist upwards of 10,000 receptors that receive various messages.

If we compare a cell to the Earth, given the same ratio, the thickness of the cell

membrane is at the same ratio as that of the biosphere.

When and where does life begin, and where is it bound?

The hormone waiting in readiness, as in secretory granules in the cell.

Soon, hormone molecules are released from the secretory cells, and sent off into the

When compared to the fast transfer of information via the nervous system, information

transmitted by a hormone is slow but accurate.

only by the target cells that have its specific receptors.

In response to this message, cells begin to produce materials, working towards the birth of new life.

The sperm struggle up the uterine tube.

At last, the sperm encounter the egg.

Of the 300 million sperm cells, only one burrows into the ovum.

Here, the two fuse - the nucleus of a sperm containing the father's genes, and the

nucleus of the ovum, containing the mother’s.

The first cleavage of new life with the new gene combination.

The fertilized egg hatches out.

Immediately after slipping into the uterine wall, the egg starts constructing

Of a bloodisland, which becomes a source for blood vessels and cells

Before long, a somite appears. This is the origin of the spine.

Cells that contract form the heart.

In the embryo’s eyes, cells multiply through cell division, and align themselves vertically.

These cells lose their nucleus and mitochondria, changing into long, transparent fibers

to form the lens of the eye.

In the mucosa of the nose are arrayed cells with cilia, and cells that can distinguish

Taste buds, cells that can distinguish tastes, are formed.

The liver, seen under the heart.

The cells proliferate, giving the fetus its shape.

Between adjacent cells, one dies and the order lives on. Cells give new shape by dying.

At about the time as the sex of the embryo can be distinguished, spermatogonia are

prepared in the testes,

whereas ovogonium are prepared in the ovaries.

At about this time in thymus, enormous nurse cells appear which nurture immune cells.

The green cell is a nurse cell. The orange cells are immune cells.

Production of blood cells now moves from the liver to the bone marrow. An

By losing their nuclei, red blood cells become flexible and deformable. They flow

through capillary vessels, carrying oxygen to every corner of the body.

White adipose cells store fat. This creates a lay of fat under the skin, upon which the

The skull deforms to pass through the birth canal, and appears in the outside world.

The first breath forces open the alveoli, and the lungs fill with air.

With its first breath, the baby has its first encounter with other creatures.

Microorganisms taken in with air are known to inhabit the cilia in the pharynx. There

they stay until the immune system is developed.

Now, the organs in the body begin to function.

When a person first becomes conscious of sex, the body begins in earnest preparing

toward the production of the next generation.

The onset of maturity is a time of joy and anxiety.

On the surface of the sperm ducts, cells are individually excited, little by little pushing

up the sperm that as yet have no motility.

Mature sperm wait for their moment.

A mature ovum waits for its moment.

Only one ovum is chosen every month, and released at ovulation.

At what point does the brain become human?

The number of nerve cells gradually increases, and at birth, the child’s brain has 14

billion nerve cells, the same as an adult brain.

The nerve cell network becomes increasingly complicated, influenced by the

environment and culture. One year after its birth, a baby stands up and walks, and soon,

it begins to speak. By using language, a human being gains the ability to think

Four and a half billion years ago, the earth was formed.

At one point, a bacterium entered a cell, and the two worked in symbiosis as a

and this system gave rise to a great variety of creatures.

All creatures on earth have the same genetic system, and they all live in the same place

in time and space.

When plants came into existence, their photosynthesis created an atmosphere. A closed

ecosystem, the biosphere came about.

Species came into existence, changed with the passing of time, and gave rise to new

species. In due course, man was born. Only human beings have successfully spread

throughout the one and only biosphere, and affecting the very circulation of energy on

The sun’s energy nurtures all life.

The gravitational pull of the moon gives the rhythm of life and death to living things.

At present, four babies are born on the Earth every second. None of them ever existed

before, and none of them will ever exist again. They are born and exist only once, a new