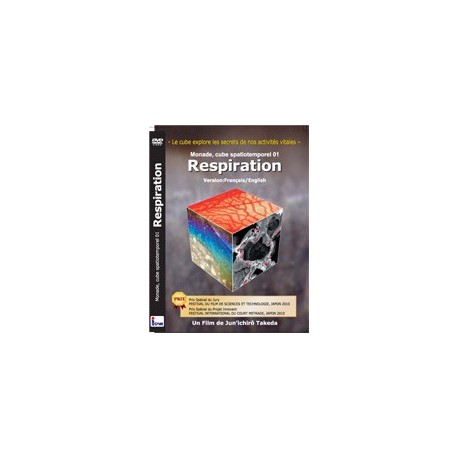 The series ‘Spacetime Cube Monade’ totally captures all images unfold in time and space axis through the story with 3D cubic world. The first one features ‘ Breathing’ .

Breathing. Inhaling air and absorbing its oxygen. The air passes through the nasal cavity, and strikes the respiratory tract’s walls and reaches the alveolar sacs.  The alveolar epithelium type II cells of each alveolus secrete pulmonary surfactant to protect and help to expansion of alveoli. The gas exchange takes place alveoli and capillaries on them. The hemoglobin in the red blood cells bind with oxygen and carry to all the cells of the body.

Every cell in the body uses oxygen to produce energy, stores as ATP and consumes. And then carbon dioxide occurs.  It is carried to alveoli and is exhaled with the breath. The air expelled through our bodies returns to the atmosphere.

The special network of blood vessels of cavity instantly warms and moistens the air. The collaboration between goblet cells secreting mucous and ciliary cells clean the air. As the alveoli expand and contract, the red blood cells also swell and flatten. The water channels named "aquaporins of membranes of the red blood cells support it. Various cells and various molecules are operating breath.

(Chapter 1 : Absorbing oxygen)
Breathing. Inhaling air and absorbing its oxygen.Each breath sucks in 0.5 liters of air. Eight liters of air pass through the nasal cavity every minute.  The respiratory tract continuously branches and narrows. The air strikes the respiratory tract’s mucus-covered walls and is sucked down spinning like a vortex until it reaches the alveolar sacs, which cluster like bunches of grapes at the end of the bronchioles. The air fills the alveoli in the sacs. Each alveolus has one or two alveolar epithelium type II cells, which secrete pulmonary surfactant.The cells that form the alveoli are not harmed by coming into direct contact with the air because of the protection provided by the pulmonary surfactant that thinly coats the inner walls of the alveoli. The pulmonary surfactant enables the alveoli to smoothly expand, then return to normal.Red blood cells charge along the capillaries, separated from the alveolar walls by a 0.5-micron barrier created by vascular endothelial cells. This is where the gas exchange takes place.Protein and sugar chains float on the surface of the red blood cell membrane.Flowing in the direction of high to low pressure, the oxygen gas passes out of the alveoli and into the red blood cells.The hemoglobin wriggles in the red blood cells.Each red blood cell contains 300 million molecules of hemoglobin.A hemoglobin molecule consists of four units. Each unit bonds with a single oxygen molecule.Oxygen cannot be stored inside the body.We breathe constantly, without a single break, to enable the oxygen that has bonded with the hemoglobin in the red blood cells to be carried to all the cells of the body.

(Chapter 3 : External respiration – bring oxygen to hemoglobin -)
The inner wall of the bronchial tube.Here, too, blood vessels are arrayed like a mesh to warm and humidify the air. The bronchial walls are covered in mucus with sol and gel layers deep into the respiratory tract, and the ciliated cells do their work.Mucus is also secreted by the bronchial tube’s secretion glands. The particulates and bacteria captured by the mucus become phlegm, which is carried away by ciliary movement.The respiratory tract seen through an electron microscope.The bronchioles have branched scores of times on their way to the alveoli. The expanse of cilia gradually becomes sparser until in the bronchioles near the alveoli, clara cells appear in place of goblet cells.The clara cells also secrete a pulmonary surfactant.The outside air, which entered from the nasal cavity, is carried to the alveoli at the end of the tract where gas exchange takes place. The red blood cells here are colored red.The red blood cells rush through the capillaries of the alveoli.As the alveoli expand and contract, the red blood cells also swell and flatten.  The membranes of the red blood cells feature dedicated channels named "aquaporins" for conducting water in and out of the cell, giving the red blood cells the ability to regulate their own volume and change shape.  An aquaporin pokes out onto the membrane of a red blood cell.

(Chapter 5 : Internal respiration : uses oxygen and produces energy -)
The heart, which pumps the blood all around the body, itself needs large amounts of oxygen.The cells use the oxygen obtained through external respiration to support the process of internal respiration, which produces the energy, in the form of ATP, used by the cells. Circular mitochondria are arrayed along the muscle fiber of the heart muscle cells. The internal membrane of each mitochondrion has place set aside for internal respiration using oxygen brought in by the blood. The complex of respiratory enzymes named "the electron transport system" passes through the internal membrane. This transport system “pumps” the protons across the internal membrane, from inside to outside.The electrons are continuously transferred as the chain reaction proceeds.The protons pumped to the outside of the internal membrane gradually accumulate.Here oxygen is being used. Oxygen and hydrogen react to create water molecules and also to pump the protons.Finally, the accumulated protons flow into lumen, an internal space, and the ATP synthase rotates. Each rotation produces three molecules of ATP. The mitochondria’s electron transport system functions only when necessary, using oxygen to produce just the amount of ATP that is just the amount of energy the body needs.ATP is created in the interior of the mitochondria. At that time carbon dioxide is produced.