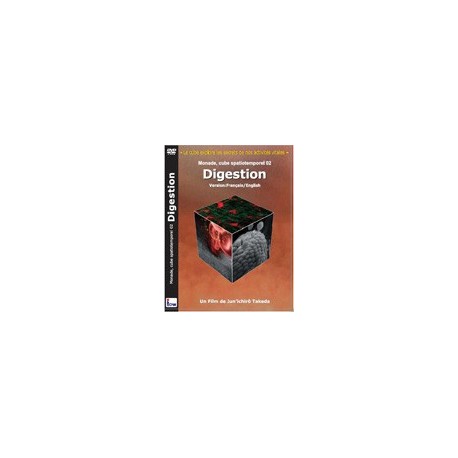 The series ‘Spacetime Cube Monade’ totally captures all images unfold in time and space axis through the story with 3D cubic world. The second one features ‘Digestion’ .

Digestion is how we take life from other things and incorporate it into our own.  The large molecules having composed other living things are broken down into smaller, microscopic molecules. Each of the epithelial cells absorb the molecules of nutrients through a thousand microvilli that make the boundary between the inside of the body and the outside. Now small molecules will be assembled into large ones, creating new life in our human bodies.

Now let’s see details of the digestion process, making full use of microscopy.  Why the stomach never digest itself, and why the stomach digests only food?  Why does the small intestine need to be so long? In our body, many cells are turning over continuously, and the sloughed-off cells of our own bodies are broken down and digested.

Receipt of taste and odor information triggers selection of nutrients to take into the body.  The autonomously acting digestive tract has individual neuron system and net working among cells. There are our immune system and symbiotic bacteria in the human digestive tract.  When we look at the digestive tract in this way, we recall evolution of creatures. The digestive tract calling this second brain may be the first home of our mind.

(Chapter 1 : Digestion and Absorption – external to the internal -)
Digestion is how we take life from other things and incorporate it into our own.   From the gullet to the stomach. Proteins are mainly digested in the stomach.They are first broken down by gastric acid, then further dissolved using digestive enzymes. Food then proceeds from the stomach to the duodenum. This black liquid is called bile. It contains bile acid, produced in the liver, and digestive enzymes, produced in the pancreas to break down carbohydrates, lipids and proteins. The exact composition of the bile varies according to the food moved from the mouth to the stomach. From the duodenum to the small intestine: This is where absorption occurs.The large molecules having composed other living things are broken down into smaller, microscopic molecules. Proteins that consist of chains of some 10,000 amino acids are reduced to molecules of just a few amino acids.Inside the small intestine, which encloses the outside environment, the mucous membrane is tightly packed with tiny fingerlike villi.The divisions of the cells that compose the villi can be seen here, along with the capillaries that transport the absorbed nutrients. And now nutrient molecules dive for the first time to the quantum world.  From macrocosm to microcosm: the world inside the cell.Each of the epithelial cells that absorb the nutrients is armed with over a thousand microvilli that make the boundary between the inside of the body and the outside.                                      Here enzymes break a connected two molecules apart. Single amino acids. And single glucose. When such smallest constituents cross the microvilli, the food leaves the outside world and enters the human body for the first time.                       These molecules go through the cell that is densely packed with organelles and toward the blood vessels. For each molecule, it is a long way journey.Riding the bloodstream, the molecules are transported to cells throughout the body, providing vital energy. Now small molecules will be assembled into large ones, creating new life in our human bodies.